Saved Searches Advanced Search
All Oshawa Public Libraries branches are now open. Library items may be returned through any of the Library’s external book chutes.  Physical distancing, proper hand hygiene, and wearing a non-medical face mask or face covering is required while in the Library. For more information, please visit http://oshlib.ca/service-update.
Print 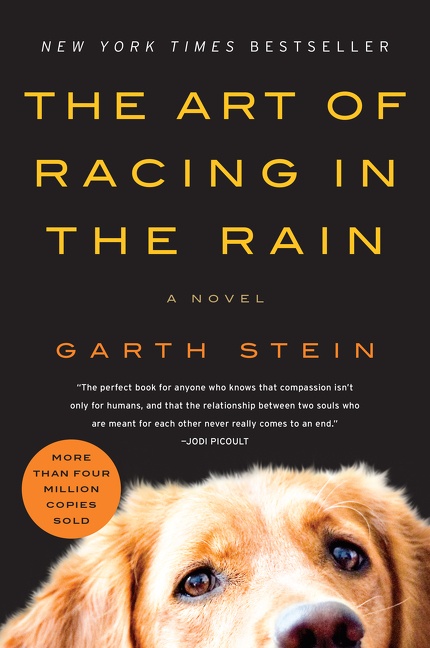 The Art of Racing in the Rain

NOW A MAJOR MOTION PICTURE FROM FOX 2000 STARRING MILO VENTIMIGLIA, AMANDA SEYFRIED, AND KEVIN COSTNER MEET THE DOG WHO WILL SHOW THE WORLD HOW TO BE HUMAN The New York Times bestselling novel from Garth Stein—a heart-wrenching but deeply funny and ultimately uplifting story of family, love, loyalty, and hope—a captivating look at the wonders and absurdities of human life . . . as only a dog could tell it. “Splendid.” —People “The perfect book for anyone who knows that compassion isn’t only for humans, and that the relationship between two souls who are meant for each other never really comes to an end. Every now and then I’m lucky enough to read a novel I can’t stop thinking about: this is one of them.” —Jodi Picoult “It’s impossible not to love Enzo.” —Minneapolis Star Tribune “This old soul of a dog has much to teach us about being human. I loved this book.” —Sara Gruen
Publisher: [S.l.]: HarperCollins, 2009.
ISBN: 9780061738098
Characteristics: 336 p.
Additional Contributors: cloudLibrary

The Art of Racing in the Rain was chosen as our Pass the Book – Oshawa Reads 2019 title. The book does not fall into my usual go-to genres, but it was a pleasant surprise! I think that it is well written especially with it being such a different type of narrator than I'm used to, it was very easy... Read More »

completely heartwarming and heartbreaking all at once

TOTALLY LOVED THIS BOOK. Watched the movie the next night.

To call this just a dog story totally underrates the book. Loaded with wonderful insights and "philosophy of life" stuff that makes life meaningful. A dog's life is all in the moment and racing in the rain for a driver encompasses each moment where the driver, the car, the track and the rain are all one. Just a great book.

This story came from an interesting prospective....the family dog. Not something I've done before. It was alright for a one of. He was lovely & loving. There was a death & a custody battle all interspersed with how to drive a racing car. Refreshing is another word that you could use for this story.

I'm not a dog owner, so maybe I would have liked the book better if I was. I couldn't really get into it and sometimes felt like the dog was voicing opinions that wouldn't be acceptable coming from a human character, particularly a male human character.

Love, love, loved this book. A must read.

I had this on hold for a while and then when it came up for me to check out, I was hesitating to do it because we had just lost our dog to an inoperable tumor. Needless to say, I didn’t want to read something that would have me crying every time I turned a page! But it was a WONDERFUL book! I LOVE this dog! He is loving, loyal, funny and wise. There are a lot of life-lessons that the furry narrator doles out in this book, and some very empowering ones at that. A vet that I had when I lived in another town used to say that our dogs are just furry people with four legs who can’t talk. He was right.

The Art of Racing in the Rain is about a dog named Enzo, and the life he lives with his race car driving owner Denny. However, Enzo is no ordinary dog, as he possesses the philosophical beliefs that make him have qualities similar to a human. Known as man’s best friend, Enzo is always there through the many tough situations Denny encounters with his life. When his wife unexpectedly dies, he is left with a battle for the custody of his daughter Zoe from her selfish grandparents. With his racing dreams and , Denny learns never to lose hope, and that if you don’t give up, things will eventually go your way.

This book was wonderful! It was a little sad, funny, suspenseful. It also made me think differently about how I talk to my dog.

This book is great. I love how it is somewhat similar to the "A Dogs Purpose" series since it is in Enzo's perspective. Have you seen the movie? I have and it was okay since they missed some of my favorite events but they kind of got the characters similar to the description in the book.

graceemerritt thinks this title is suitable for 13 years and over

imaniloff thinks this title is suitable for 14 years and over

yellow_fox_20 thinks this title is suitable for 13 years and over

Billy_Bob thinks this title is suitable for 15 years and over

Red_Dog_573 thinks this title is suitable for All Ages

maria72094 thinks this title is suitable for 13 years and over

One day I was walking down Bernerd st and spotted this book on a sales table at mosaic books. As soon as I picked it up I was intrigued by the title and thought without hesitation, this is a must read.

I thoroughly enjoyed this story narrated from a dog. There was a lot of emotion involved in this story. Sadness and happiness to see the family go through so much and still come out good in the end..

A tale in which Enzo, a loyal family dog, tells the story of his human family, how they nearly fell apart, and what he did to bring them back together. Enzo knows he is different from other dogs - he thinks and feels in nearly human ways. He has educated himself by watching extensive television, and by listening very closely to the words of his master, Denny Swift, an up-and-coming race car driver.

Enzo knows he is different from other dogs' a philospher with a nearly human soul (and a obsession with opposable thumbs), he has educated himself by watching television and listening carefully to the words of his master, Denny Swift, an up and coming race car driver. Now in his twightly years, Enzo finds himself thinking back on his life with the Swift family, reflecting on all he has learned about the human conditions and how life, like racing, is about so much more than simply going fast.

There is no dishonor in losing the race. There is only dishonor in not racing because you are afraid to lose.

"Gestures are all that I have; sometime they must be grand in nature"