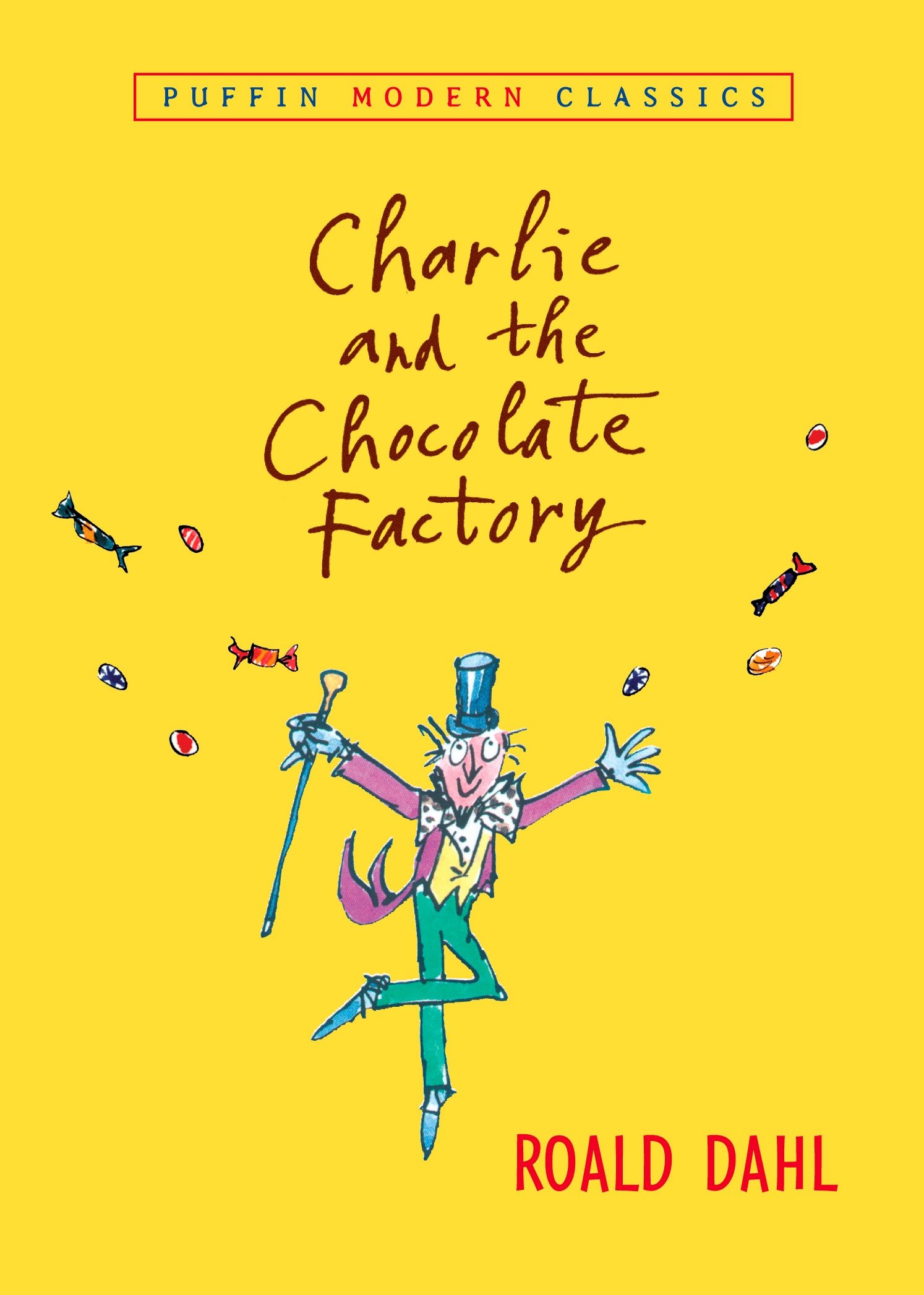 Charlie and the Chocolate Factory

Willy Wonka's famous chocolate factory is opening at last! But only five lucky children will be allowed inside. And the winners are: Augustus Gloop, an enormously fat boy whose hobby is eating; Veruca Salt, a spoiled-rotten brat whose parents are wrapped around her little finger; Violet Beauregarde, a dim-witted gum-chewer with the fastest jaws around; Mike Teavee, a toy pistol-toting gangster-in-training who is obsessed with television; and Charlie Bucket, Our Hero, a boy who is honest and kind, brave and true, and good and ready for the wildest time of his life!
Publisher: [S.l.]: Penguin Young Readers Group, 2007.
ISBN: 9781101653678
Characteristics: 176 p.
Additional Contributors: Blake, Quentin - Illustrator
cloudLibrary

Way better that the movie.

A globally recognized classic, Roald Dahl’s novel displays immense creativity in an easily understandable format. The book centers around Charlie, a boy from a poor family living near a huge chocolate factory. The factory is owned by Willy Wonka, an eccentric inventor whose passion lies in candy making, but has not made any recent public appearances. However, Willy Wonka provides a chance for five people around the world to tour his factory, in hopes of finding a suitable heir. By sheer luck, Charlie is selected as one of the five recruits, and faces the challenge of proving to Wonka his qualification to become the next manager of the chocolate factory. Though the novel appears to be overloaded with creative elements at first glance, the author maintains a steady connection between his seemingly bizarre ideas, producing a unique but easy to understand book. I would recommend this book to those seeking a light and fun read.
Age rating: 8 and up

Charlie and the Chocolate Factory's a magical story that will stay with you forever. From the moment you start reading it feels like you jumped straight into a movie. Dahl's writing style is truly unique and one of a kind. The way he describes the endless amount of sweets mentioned in this book can make you think you're actually eating them and savoring each bite. Each chapter has it's own version of a sweet twist. In my opinion the best part of the book was when Violet Beauregarde snatched the piece of gum from the machine slot and greedily shoved it in her mouth. The way Violet described the flavours that buzzed and burst in her mouth was written in such a way you vividly imagine the meals sliding down your throat.

Willy Wonka is a legendary chocolate maker, the best of the best. He has sent out 5 special golden tickets which will grant access to his amazing chocolate factory to whoever finds them.

Charlie lives with his grandparents in a small cottage. His family is poor and unfortunate. But all that changes when Charlie finds a golden ticket.

This book is charming and magical. Roald Dahl has done an amazing job writing this book and I would definitely recommend it to anyone looking for a mystical yet funny story.

I really like reading children’s novels for the fact they can be silly and odd, Charlie and the Chocolate Factory certainly fits that description. While this novel teaches a very important lesson about kindness its also a little heavy for young readers. By heavy I mean that when a character is punished for their bad behaviour they experience things most humans shouldn’t be able to. Of course this is just a children’s book and odd things are bound to happen, I just think the punishments are a little too much. Overall it was an interesting novel and a rememberable one so I definitely recommend it to everyone of all ages! 2/5 stars
@Celine of the Hamilton Public Library's Teen Review Board

Charlie and the Chocolate Factory by Roald Dahl is a very interesting book. It’s about Charlie Bucket, who lives in poverty with his parents and four grandparents. One day he learns about the legends of Willy Wonka. Soon after, Wonka announces that five golden tickets have been placed in random Wonka bars. Whoever finds it will get to tour the factory. It is incredibly bizarre at some points as various parts of the factory can really be pure imagination. Some laughable areas, like the children receiving their punishments, are actually really horrific. Despite the silly nature of the story, it does teach valuable lessons to the reader. The story shows that people can be poor and still lead virtuous lives. Overall, it is a very good book. Would recommend it.

This book is my favorite book by Roald Dahl

There's a lot to love in this fantastical tale (though I do wish Dahl wasn't so keen on dismissing characters base on their looks). Watch young eyes grow wide imagining the delights and hazards of Willy Wonka's Chocolate Factory.

ihsuhk thinks this title is suitable for All Ages

tang88260_0 thinks this title is suitable for All Ages

sarahbru17 thinks this title is suitable for All Ages

cucho_cat thinks this title is suitable for All Ages

RowanReviews thinks this title is suitable for 5 years and over

black_shark_105 thinks this title is suitable for All Ages

kannb71 thinks this title is suitable for All Ages

blue_cheetah_36560179 thinks this title is suitable for All Ages

niku1234 thinks this title is suitable for All Ages

''I have something very important to talk to you about, my dear Charlie.''

"Lollipops... what we call cavities on a stick."

"violet is as big a blueberry" lol

“Everything in this room is eatable. Even I'm eatable! But that is called cannibalism, my dear children, and which is frowned upon in most society.”

“Mr Willy Wonka can make marshmallows that taste of violets, and rich caramels that change colour every ten seconds as you suck them, and little feathery sweets that melt away deliciously the moment you put them between your lips. He can make chewing-gum that never loses its taste, and sugar balloons that you can blow up to enormous sizes before you pop them with a pin and gobble them up. And, by a most secret method, he can make lovely blue birds' eggs with black spots on them, and when you put one of these in your mouth, it gradually gets smaller and smaller until suddenly there is nothing left except a tiny little DARKRED sugary baby bird sitting on the tip of your tongue.”

“But there was one other thing that the grown-ups also knew, and it was this: that however small the chance might be of striking lucky, the chance is there. The chance had to be there.”

“Of course they're real people. They're Oompa-Loompas...Imported direct from Loompaland...And oh what a terrible country it is! Nothing but thick jungles infested by the most dangerous beasts in the world - hornswogglers and snozzwangers and those terrible wicked whangdoodles. A whangdoodle would eat ten Oompa-Loompas for breakfast and come galloping back for a second helping.”

Charlie is very poor. His dad works at a toothpaste factory only putting the caps on all day. Mr. Willy Wonka is giving 5 Golden tickets found in chocolate bars. One day Charlie...

Charlie bucket is the child of a poor
family and she wanted to try to find a
golden ticket later she found a
dollar bill in the snow and bought 2
candy bars...

The story centers around an average and poor boy named Charlie Bucket, who lives in extreme poverty with his extended family, and his adventures inside the chocolate factory of Willy Wonka. Years prior to the beginning of the story, Willy Wonka opened the largest chocolate factory in the world, but spies stole his recipes, so he eventually closed the factory to the public. Then the factory began to run again while still closed to the public with the aid of 'mystery workers' and it had been running that way for the past ten years. Then one day Mr. Wonka decided to allow five children to visit the factory. Each child will win a lifetime supply of chocolate after the factory tour. The children have to find one of the five golden tickets hidden inside the wrapping paper of random Wonka bars. The hunt for the tickets turns into a world-wide mania, with each ticket find a media sensation and its finder an instant celebrity. Augustus Gloop (a boy who eats constantly), Veruca Salt (a girl who is spoiled), Violet Beauregarde (a girl who chews gum all day), Mike Teavee (a boy who is addicted to television), and Charlie Bucket win the tickets and visit the factory.

There are no notices for this title yet.