Saved Searches Advanced Search
Please note: All Oshawa Public Libraries branches will be closed Thursday, July 1 for Canada Day.  Regular hours will resume Friday, July 2.  Don't forget you can always manage your account, browse, borrow, or stream thousands of ebooks, audiobooks, music, and so much more through our website!
All Oshawa Public Libraries locations now offer computer appointments and access to printing and photocopy services in addition to Library take-out (curbside pickup).  All locations will remain closed for in-person browsing and study and leisure spaces at this time. Curbside take-out services: please call 905-579-6111 or click here to make an appointment once you have been notified that your holds are available.  Click here to continue reading about Library updates.
Print 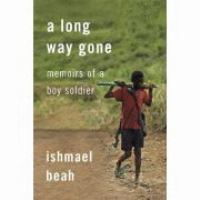 Memoirs of A Boy Soldier

Unforgettable testimony that Africa's children . . . have eyes to see and voices to tell what has happened. And what voices! . . . No outsider could have written this book, and it's hard to imagine that many insiders could do so with such acute vision, stark language, and tenderness. It is a heart-rending achievement. -Melissa Fay Greene, "Elle."
Publisher: Toronto : Douglas & McIntyre, 2007.
ISBN: 9781553652991
9780374105235

Captivating, gritty,powerful and emouvant! Amid the horrors of war through the eye of children there were still glimpses of kindness and humanity. A must read!

The nonfiction story of 'A Long Way Gone' features the memoirs of the author as a young, boy soldier. These kinds of books are not a common sight to see. Here we learn about Ishmael's rough past as a kid who lived the life of a soldier, which is when most kids his age would be having fun or going to school. Throughout this, we learn about the trauma, experiences, and rehabilitation he went through over his life. It is incredibly heartbreaking to read over what's happened to him, but it brought open a new perspective.
Even with the little amount of dialogue, I found it an interesting book that highlights one of the many experiences in life.

This book is a rare look into a war that many people did not know was going on. Beah shares his story as he his running away from the war, fighting to stay alive. This book has so many moments were you can not fathom that this is a true story. Beah also talks about his life after the war and getting rehabilitated. This book will leave you wanting more and more. If you are looking for a book that will open your eyes to a new side of life then this is the book for you.

Hard to believe this young man isn't a psycho after what he went through. It is heart breaking that children are subjected to such terrible things and forced to do things just to survive. This "kid" was one of the lucky (tongue in cheek) ones to come out of this nightmare that no one would ever want to endure.

Ishmael's story of survival is far more brutal but in some ways similar to Saroo's journey in A Long Way Home (aka Lion) ... both sad but hopeful and highly recommended. There's a garden of Eden scene in the middle that's a bit surreal like the eye of a storm, but the rest is gritty reality.

Struggle through some of the writing, because the story is powerful and moving. As a westerner, I know far to little about civil war that breaks out in the developing world. So happy he has had the chance to tell his story to the UN. This is heart-breaking and hopeful at the same time. Truly a redemption story.

This is a must read with some qualifiers: be prepared to get out of your head and discover conflict from another point of view; and be ready to experience loss, fear, shame and guilt in the story of a survivor, a perpetrator and a child. From the vantage point of having survived life as a boy soldier Beah provides us with a compassionate telling of a brutal story.

This was one of the best books I have ever read, but was also one of the hardest to read. The experiences and memories told by Beah throughout the story can sometimes take an emotional toll on the reader. It's crucial to the story that Beah does not hold back description wise to truly show the reader just how bad of a situation all of this was. Beah's incredible writing style makes this novel a fast paced read that flows smoothly. I highly recommend this book to anyone looking to become more informed on the child soldier crisis or anyone that just wants a good fast paced read.

This was one of the hardest books I have ever read. Right up there with Man's Search For Meaning. It breaks my heart that there is such a lack of humanity in the world, yet I find myself uplifted at the same time to see the return of this man from such a destroyed soul to such a kind and grateful one. I cried throughout the story, and bawled my eyes out reading his acknowledgements. The chronology was enlightening and frightening as well. This book may cause a stir in you and should certainly humble all who read it.

starbits thinks this title is suitable for 14 years and over

Daniel_Heuer thinks this title is suitable for 13 years and over

humbleworm thinks this title is suitable for 14 years and over

spl_merley thinks this title is suitable for 15 years and over

CYU_BJ thinks this title is suitable for 16 years and over

Ktmay429 thinks this title is suitable for 14 years and over

Ólive thinks this title is suitable for 14 years and over

MelissaBee thinks this title is suitable for 18 years and over

belleétoile thinks this title is suitable for 12 years and over

There were all kinds of stories told about the war that made it sound as if it was happening in a faraway and different land. It wasn't until refugees started passing through our town that we began to see that it was actually taking place in our country. Families who had walked hundreds of miles told how relatives had been killed and their houses burned. Some people felt sorry for them and offered them places to stay, but most of the refugees refused, because they said the war would eventually reach our town. The children of these families wouldn't look at us, and they jumped at the sound of chopping wood or as stones landed on the tin roofs flung by children hunting birds with slingshots. The adults among these children from the war zones would be lost in their thoughts during conversations with the elders of my town. Apart from their fatigue and malnourishment, it was evident they had seen something that plagued their minds, something that we would refuse to accept if they told us all of it. At times I thought that some of the stories the passersby told were exaggerated. The only wars I knew of were those that I had read about in books or seen in movies such as Rambo: First Blood, and the one in neighboring Liberia that I had heard about on the BBC news. My imagination at ten years old didn't have the capacity to grasp what had taken away the happiness of the refugees

At age 12, Ishmael Beah fled his village after it was attacked. At age 13, he joined the government armgy and is feed drugs in order to attack villages. At 16, he is removed from fighting by UNICEF and through the help of staff at his rehabilitation centre, he learned how to forgive hmself to regain his humanity and finally to heal. He eventually imigrates to the US and is adopted by a family. He attended school and university.

"My high school friends have begun to suspect I haven't told them the full story of my life."

There are no notices for this title yet.